Wait on the Lord; Be of good courage, And He shall strengthen your heart; Wait, I say, on the Lord!

This was the verse of the day on my phone today. Fitting because the group just returned to the USA this morning, leaving me behind. Already God is confirming to me that I am to wait here. This is how the Lord led me the last few years, by saying go or wait. I have learned in the past that waiting actually takes more faith then going does, since you have to trust in His planes and His timing.

It seemed like I was just as busy today as I was when the team was here. Freddy and I went to visit a woman who was grieving her mothers death and got to share the word with her. Apparently the idea to visit her came from one of Freddy’s classmates (the daughter of the woman we visited). What’s amazing about this is the mother is a Catholic and the daughter doesn’t have any beliefs, but is considering Christianity. Despite not having the same belifes she invited Freddy over in order to help her mother with her grief, it also didn’t hurt that they also treated us to a traditional home made almuerzo (lunch, which is the main meal of the day here. Consists of rice, meat eggs, juice and a thing they call salad but its more like a pasta salad).

After that I moved all my stuff into another room in the house that is more comfortable (no more bunk bed) and that has more room.

I bought a doorknob that has a key so I can lock the room and not worry about my stuff getting stolen (a lot of people come and go here).

Later on we prepared for a Biblical Dinner from 4 till about 7.

Preparing. These guys work very hard to put on these dinners. 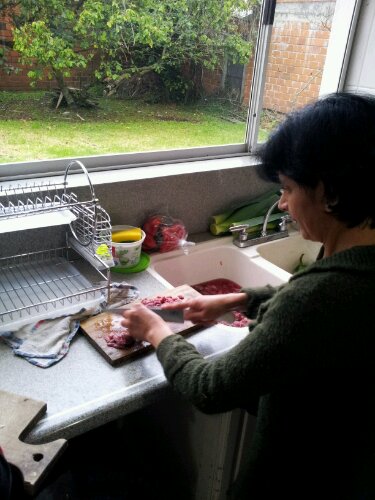 Anita, the biggest servant there. She will be considered great in the Kingdom of God, I'm sure of it.

The dinner table all set, Jessica smiling for the camera. Sorry its so dark.

Freddy has been doing these for a while and he uses it to preach and teach the Gospel to people who otherwise may have not come to church. The dinner went on from about 7 till 9:30ish then we spent some time after cleaning. One of my jobs was helping to watch some of the kids while the parents were in the dinner. At first I made one of the babies cry, but she eventually warmed up to me.

Lots of help watching ninos. Estefanie says she doesnt like kids, but she is great with them.

Overall I know this is where I am supposed to be, and I know for sure God has called me to remain here. He has confirmed it three times to me today alone, not counting all the confirmation He gave before I came. My mission is clear, preach the Gospel, teach the Word and strengthen and encourage the brethren. I’ve taken the steps to obey His calling, now its all in His hands with what He does with it.

Not that I have already attained, or am already perfected; but I press on, that I may lay hold of that for which Christ Jesus has also laid hold of me.

3 responses to “Back to Waiting”