“Hope deferred makes the heart sick, But when the desire comes, it is a tree of life.” Proverbs 13:12

I remember thinking I would never become a missionary, in fact after a while I gave up on the dream of it. But the Lord promised He would send me out, and now He has. My heart was sick with hope deferred, but now my heart is like a tree of life. The Lord has heard my prayers.

Yesterday some missionaries from Colombia (the Vargas family) were passing through Ecuador on their way back to Colombia. They apparently were serving in Cali, Columbia and I’m actually not sure as to why they were here. But one of the houses here in Cuenca (next door to the pastor’s house) is for traveling missionaries to stop by in and for teams to stay in while they are here. So, the mission house got some use the last few days. Yesterday I spent the whole day with them showing them the city (or what little I knew of it, after a while it became exploring for me too). They invited me to come visit them in Cali someday and I am pretty sure I will eventually take them up on it. One of the places where we went to was called Turi. It is a hill that overlooks all of Cuenca and has one of the most beautiful views of the city. When we were there I remembered a prayer I had prayed two years ago when I was last in Cuenca. I had not set foot on Turi since that prayer until that moment, and that is probably what triggered the memory. I had prayed that if the Lord willed for me to come back here and live here and serve Him that He would bring me back. In that moment, standing atop the mountain at Turi, gazing out to see the sprawling city, nestled amonsgt the trees and tucked away within the valley, I realized that the Lord had answered my prayer. He brought me back to Cuenca. 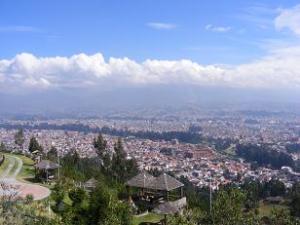 The view from Turi, its on top of a hill where you can see just about the whole city and where the Lord reminded me how He answered my prayer. 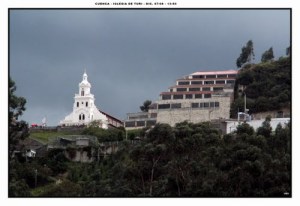 Looking up at Turi. When I look out my front door this is what I see, except that I am further down from where this picture was taken. It is quite a view.

And now here I am, a missionary in South America. Learning another culture and atempting to master a foreign language, in a land full of adventure and danger. This is the desire of my heart, and it has been fulfilled. I am still adjusting to everything, but so far I have already made a few commitments. One is helping Lorena, the missionary from Colombia, with the Children’s club in Uncovia on Saturdays. It feels like the VBS never ended when I go there since I am still leading them in the worship songs and movements that we had learned for the VBS (maybe I will actually memorize my rap solo now). Lorena really has a gift with children, she is amazing. I hope that she continues to serve there, she will be getting married soon so everything is up in the air.

Saturdays and Sundays are definitely my busiest days. Saturday morning we have a prayer meeting at 7, then I go to the Children’s club, then after that Freddy and I go to Gualaceo (a nearby city that has a Calvary Chapel). So far, out of Unvocia and Tres Puentes, Gualaceo is my favorite Calvary here. They really have a heart to pray and to worship. They have asked if I would teach once a month there and also want me to help out with evangelism. I am praying about it. I am trying not to get too busy since I will also be teaching the English service every Sunday in a few weeks, once Freddy finishes the book of James. I want to be able to do more with the English speaking people, possibly a midweek home Bible study/Prayer meeting but I am praying and waiting on that too. Other then that I am just helping out with what ever needs help, tomorrow I will be doing some secretary work and Marlin is going to help me install a doorknob. As you can see, I am just taking it one day at a time.

It seems like for me the mission trip just kept going on, and I have been just as busy as when the team was here (minus being able to sleep in a little extra a few times, shhh don’t tell Zeke). Overall I have been able to finally get to spend some well needed time with the Lord. I have had a bunch of divine appointments while wondering the city (getting to know the streets) and even discovered a great coffee shop (yes Alex, they even made me a rosetta today). Although there are giants in the land, just like the Lord told me there would be, the Lord is with me; just as He told me He would be.

Thank you all so much for all your prayers and support, they have meant the world to me.

4 responses to “I live in South America”

Join 174 other subscribers
Follow Shall Speak To Nations on WordPress.com